New Found Gold is advancing its 100% owned 1,650km2 Queensway gold project, located on the Trans-Canada highway 15km west of Gander, Newfoundland. A 500,000m drill campaign is underway. Drilling is focused on a 9.5km corridor along the Appleton fault and a 12.4km corridor along the JBP fault.

On the Appleton fault, following up on an initial discovery hole drilled in late 2019 that returned 19m of 92.9 g/t Au at the Keats Zone, the Company's drilling program has now intersected high-grade gold to approximately 845m down plunge from the initial discovery area.

Most recently, the Company announced the discovery of the new '515' zone which intercepted 9.21 g/t Au over 2.15m and 43.9 g/t Au over 3.85m. This new discovery is located between Keats and Golden Joint.

True widths of the intercepts in this presentation are reported as drill thickness along with an estimated range of true thickness. Host structures along the Appleton Fault Zone are generally interpreted to be steeply dipping and true widths are estimated to be 85% to 95% of reported widths at Keats, 80% to 90% at Lotto, 70% to 90% at Golden Joint. Infill veining in secondary structures with multiple orientations crosscutting the primary host structures are commonly observed in drill core which could result in additional uncertainty in true width. Composite intervals reported carry a minimum weighted average of 1 g/t Au diluted over a minimum core length of 2m. Included high-grade intercepts are reported as any consecutive interval with grades greater than 10 g/t Au. Grades have not been capped in the averaging. Assay data has been verified by the Company’s Qualified Person against the original assay certificates and the Company does not recognize any factors of drilling, sampling or recovery that could materially affect the accuracy or reliability of this assay data. Additional drill interval detail is provided in this presentation, in the Company’s news releases and in its NI-43-101 technical report (effective date May 31, 2022) posted on the Company’s web site and filed on SEDAR. 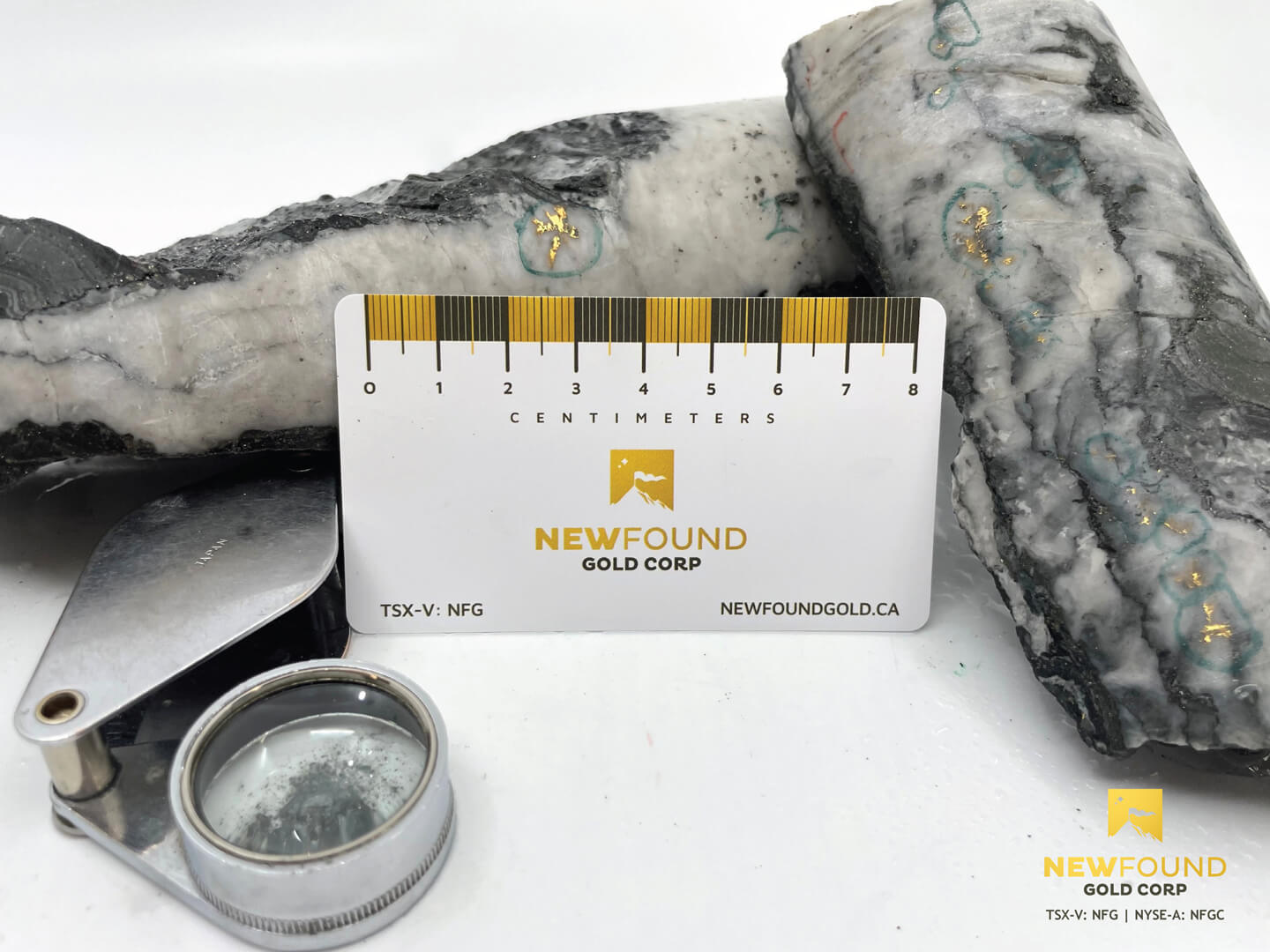 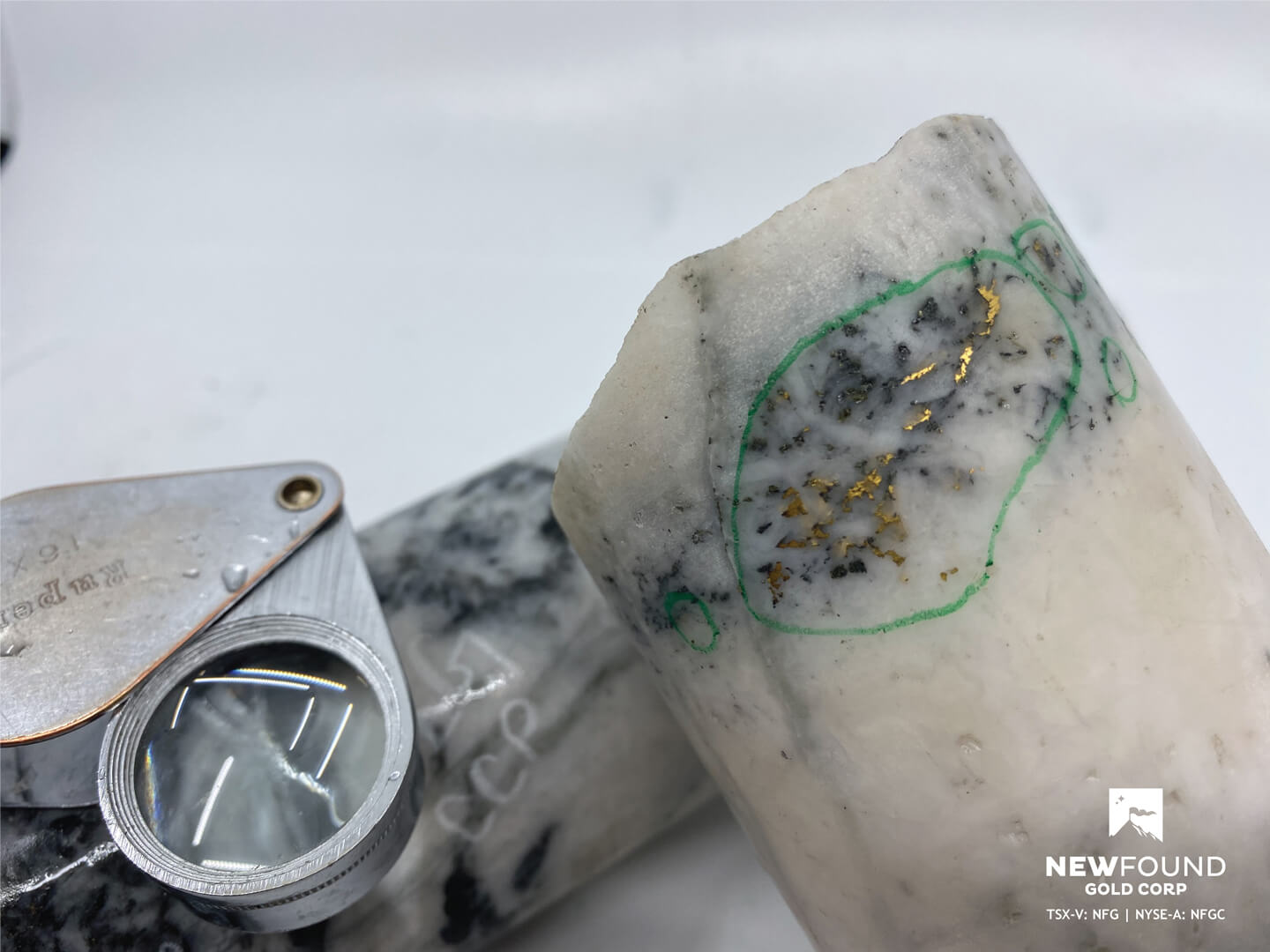 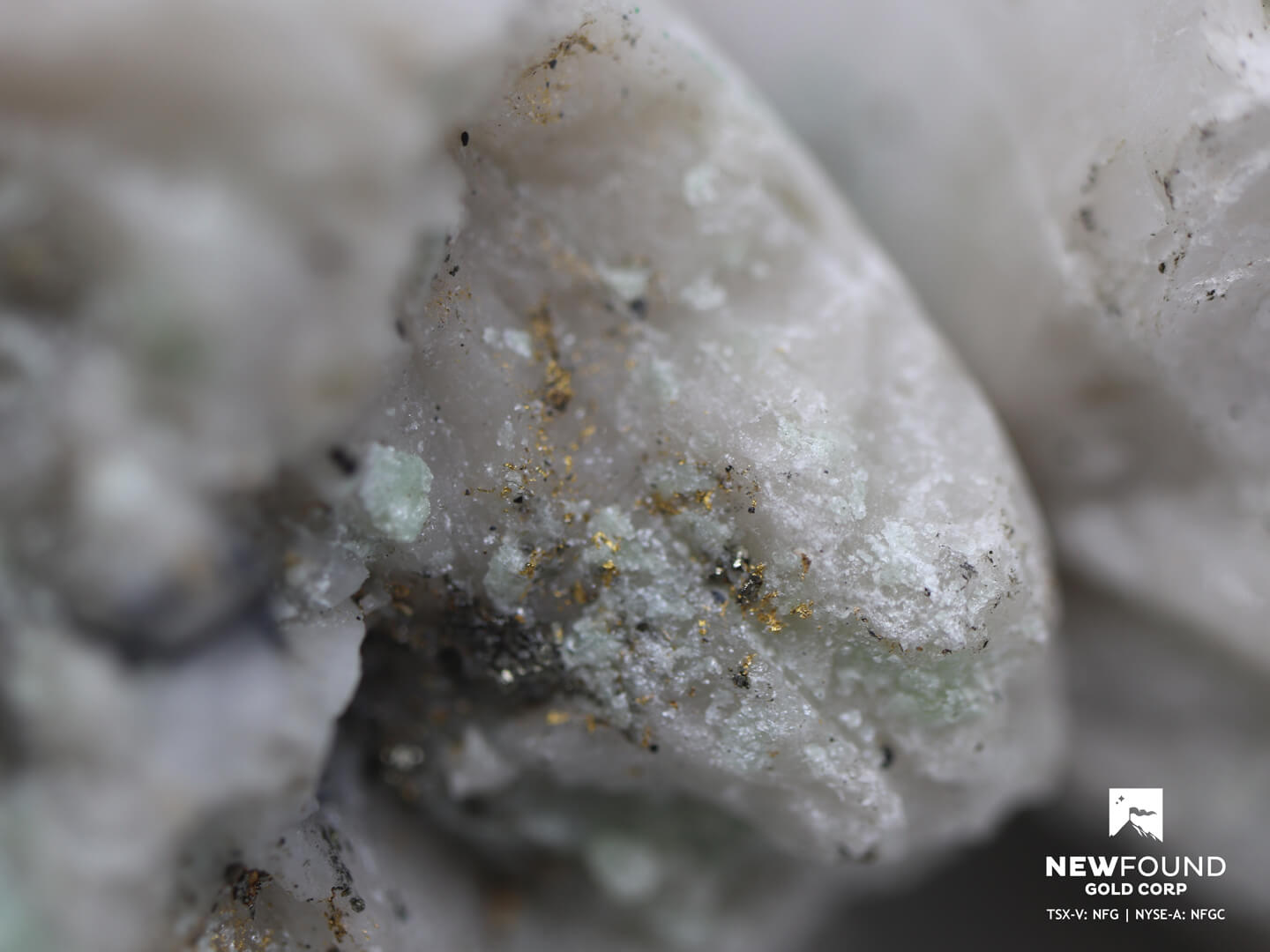 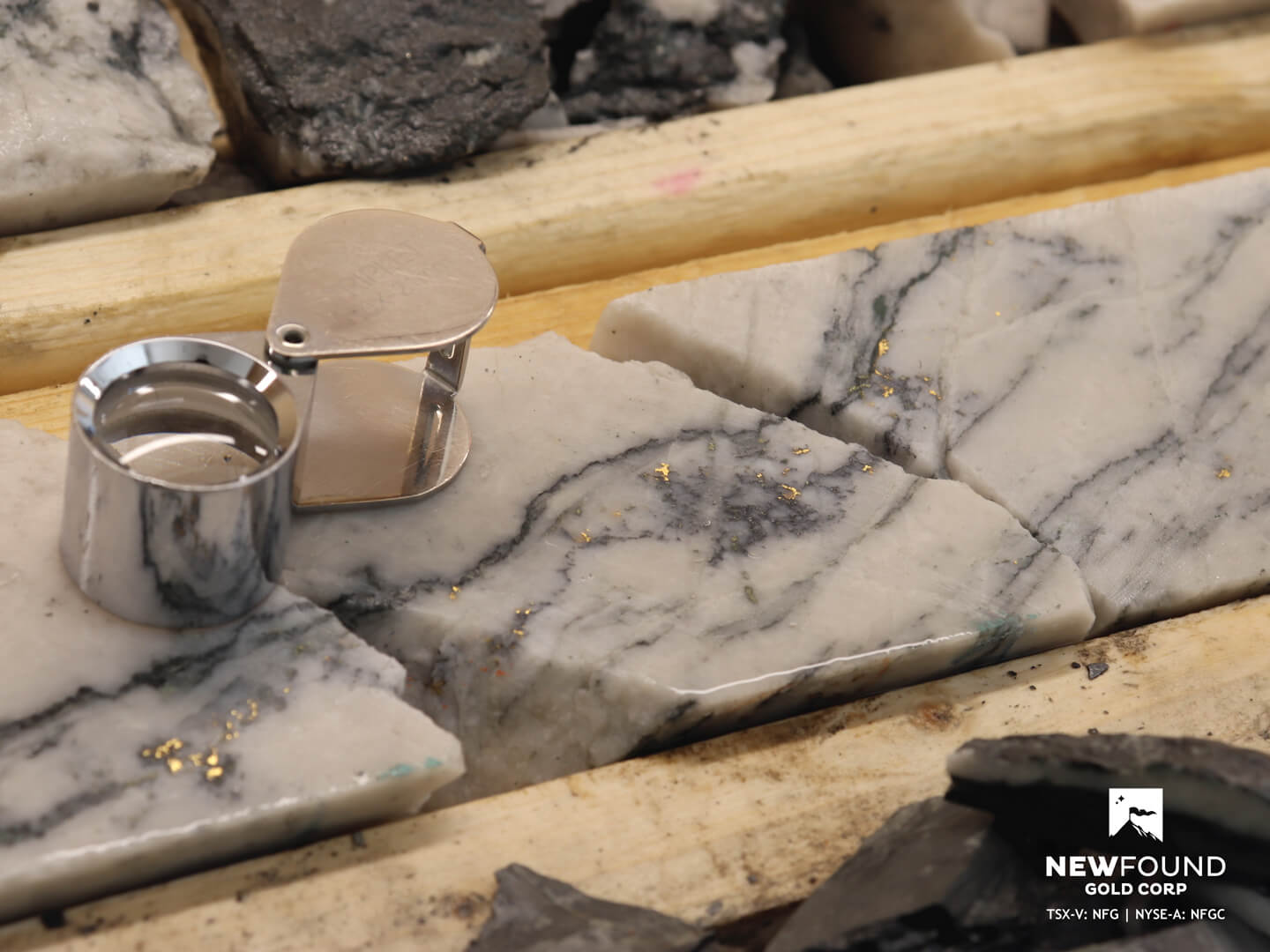 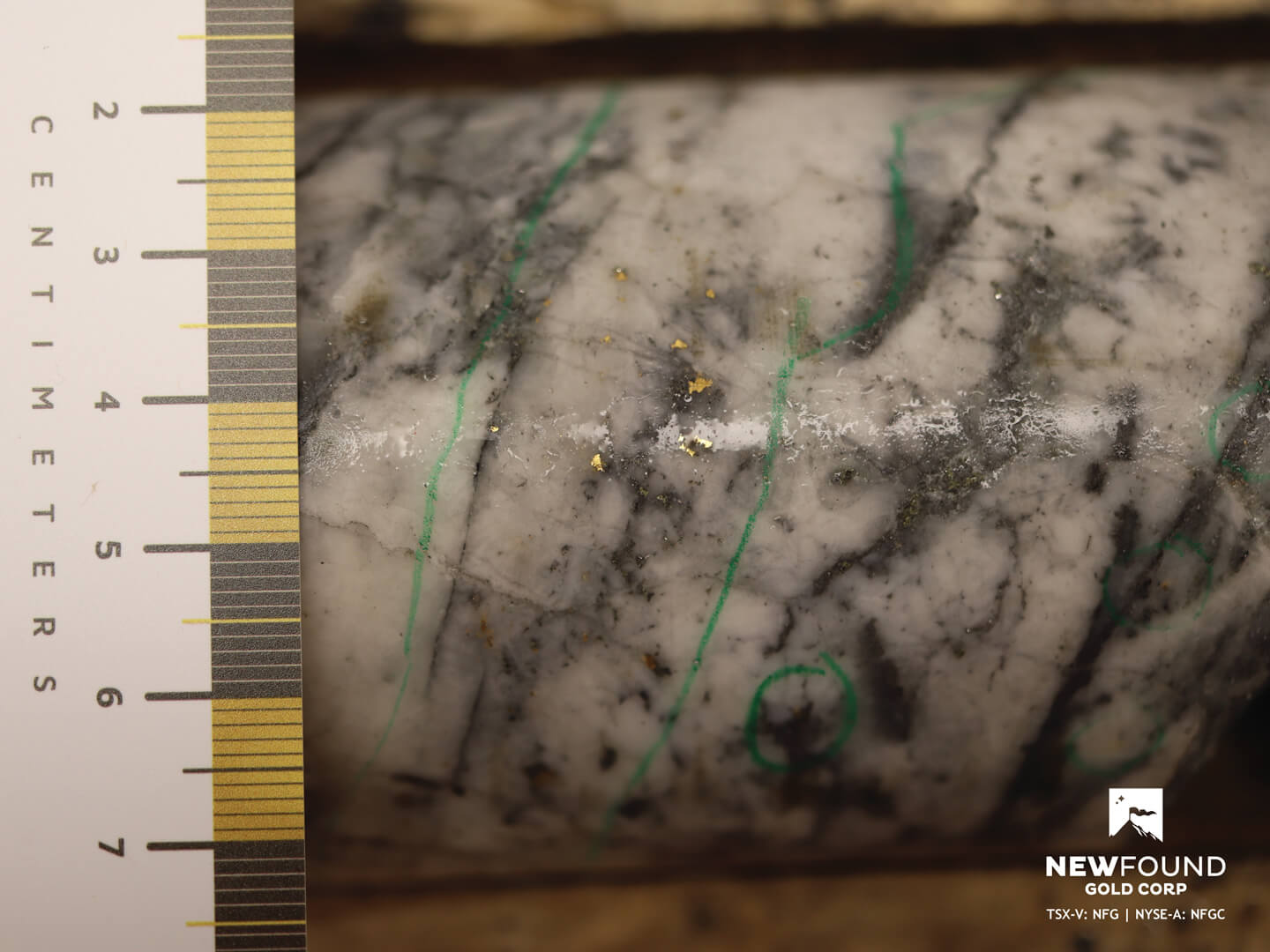 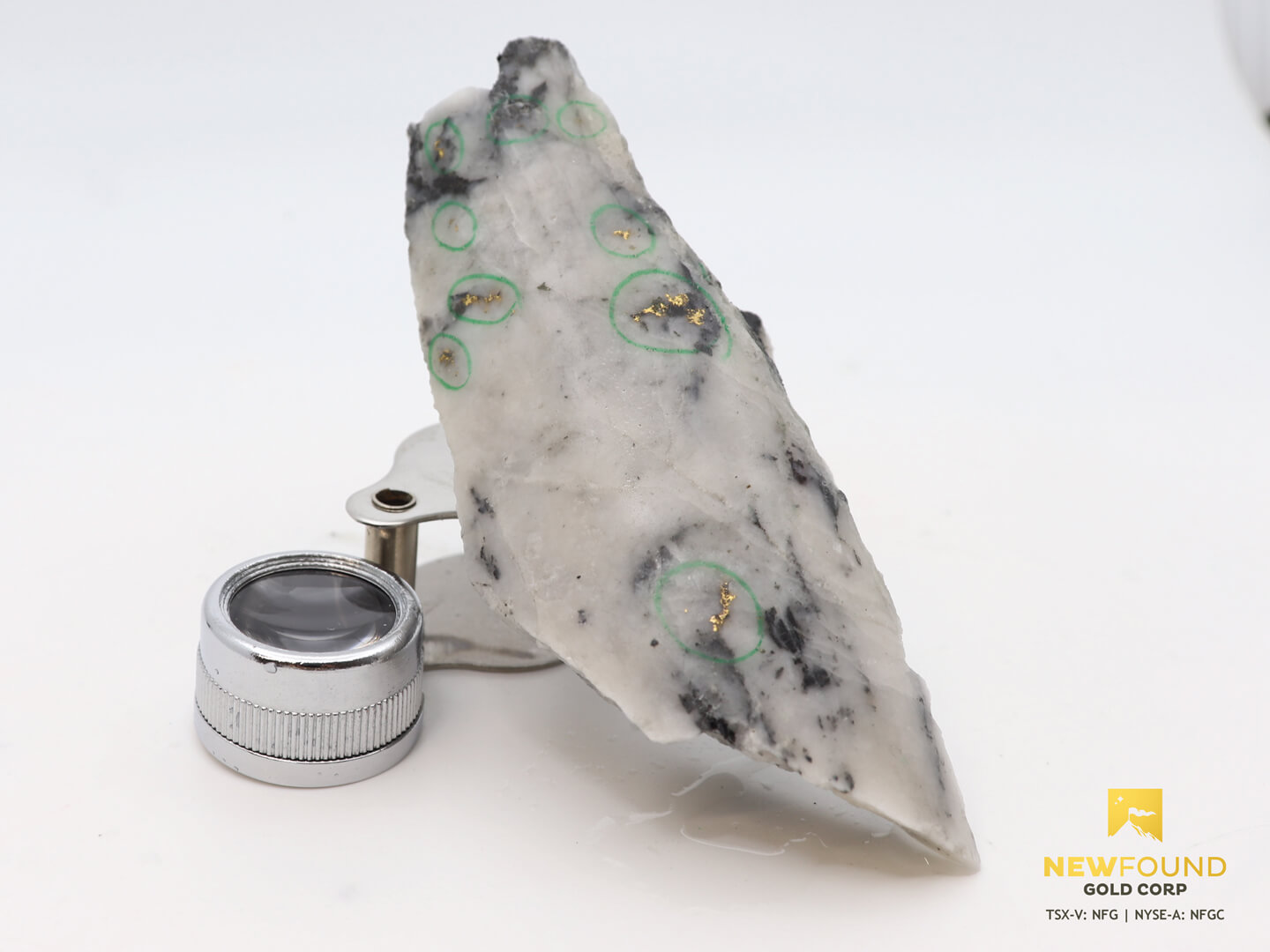 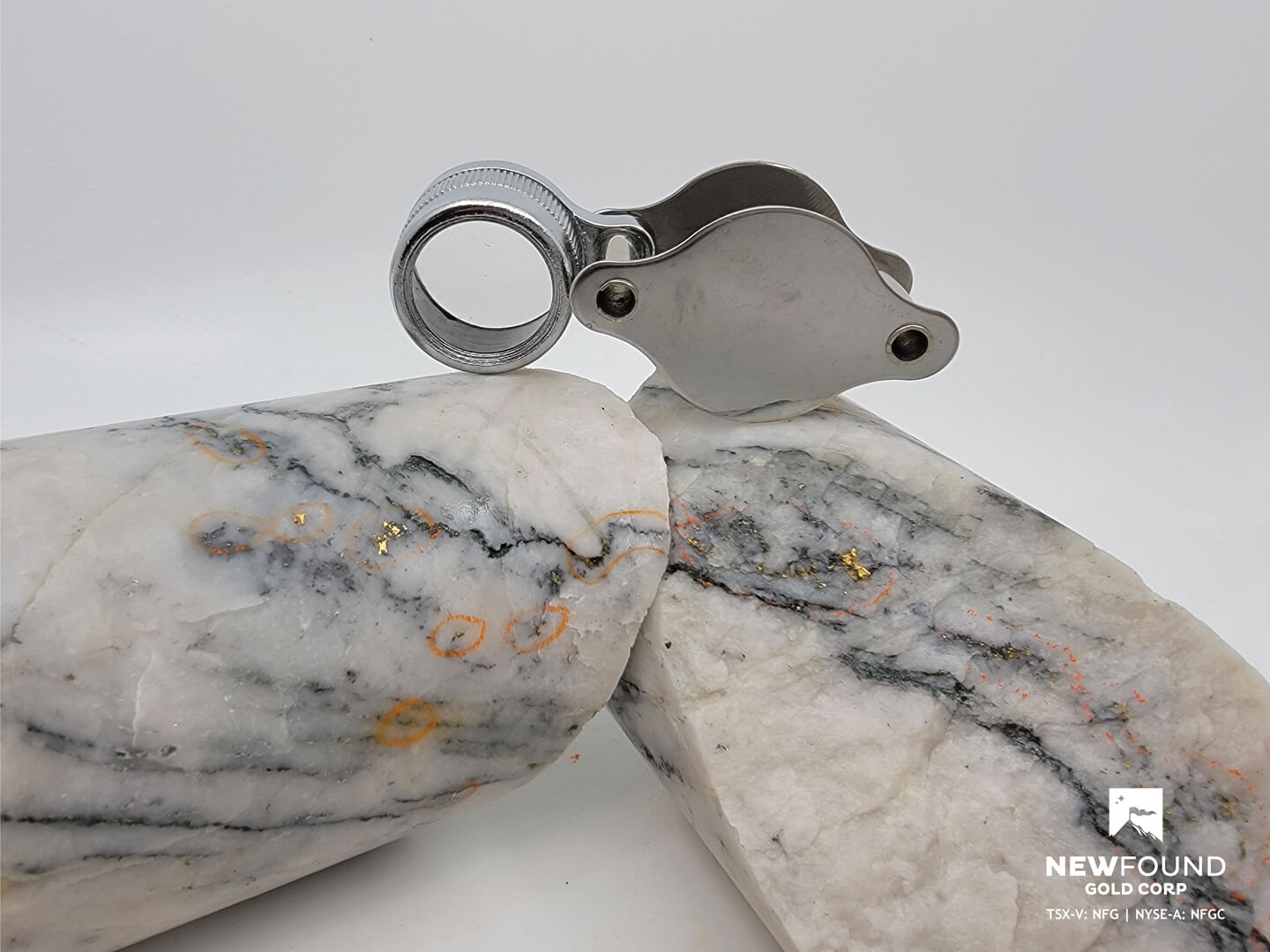 ~$90 million in cash and marketable securities*

New Found is well funded to pursue its
exploration programs.

Mr. Kettell is a co-founder of New Found Gold Corp. (2016) and of Palisades Goldcorp Ltd. (2013), a Canadian resource investment company. As Chairman and CEO of New Found Gold Corp., he is responsible for developing the strategic plan for the discovery, financing and continued exploration of the Queensway Project.
In his role as Chairman and CEO of Palisades, Mr. Kettell has been the driving force behind its inception, leading to its current stature as a multi-hundred-million-dollar investment Company, while incubating and developing several companies under the Palisades umbrella.
Mr. Kettell is an active participant in the resource sector as an investor and company builder, focused on the discovery of mineral deposits both in Canada and the United States. He is founder and CEO of Nevada King Gold Corp., founder of Radio Fuels Resources Corp., co-founder of EarthLabs Inc. (previously Goldspot Discoveries), and co-founder and director of Golden Planet Mining Corp.

Over 10 years of experience in mining and capital markets; worked as a production and exploration geologist in Timmins, Kirkland Lake, Red Lake, Norway and Ghana. Later worked as a mining analyst with Pinetree Capital. Founder, Director and Executive Chairman of Goldspot Discoveries Inc. (TSX.V: SPOT) and also currently serves as a Director for Xtra-Gold Resources Corp. (TSE: XTG).

Geologist with over 30 years experience as consultant, mining analyst, and senior executive. Part of the founding group of Newmarket Gold, which following discovery of the high-grade Swan Zone at the company’s Fosterville mine was sold to Kirkland Lake Gold in 2016 for $1 billion. Serially successful mining entrepreneur and executive. Founder of International Royalty Corporation, sold in 2010 to Royal Gold for $700 million. Serves as Chairman of Northern Vertex Mining and as a director of Calibre Mining and Newcore Gold.

Vijay is a co-founder of Arkview Capital, a private equity fund backed by the Ziff family that invests in diversity-oriented companies. Vijay is involved with several diversity initiatives, serving as a member of Genesis Bank’s DEI Committee, Board member of Clean Sea Transport, and Vice Chair of the New York Minority Supplier Development Council MBE Input Committee.
Prior to founding Arkview, Vijay was a Managing Director and member of the Investment Committee at Ziff Brothers Investments with broad responsibilities across the investment portfolio. Previously, Vijay worked at private equity fund, Texas Pacific Group and investment bank, Morgan Stanley.
Vijay graduated summa cum laude from the University of Pennsylvania’s Huntsman Program and earned an MBA from the Harvard Business School, where he was named a Baker Scholar.

Seasoned mining professional with 30+ years of experience in mineral exploration, mine operations and construction, and executive management. Ray was Chairman of Newmarket Gold and became a director of Kirkland Lake Gold upon the sale of Newmarket to Kirkland for $1 Billion. From 1996 to 2004 Ray held a variety of senior executive positions with Barrick Gold Corporation, rising to the position of Vice President, Project Development. Among his accomplishments were the Pierina Mine in Peru, Bulyanhulu Mine in Tanzania, Veladero Mine in Argentina, Lagunas Norte Mine in Peru and the Cowel Mine in Australia.

Finance professional with over 15 years of experience. Since 2008 Mr. Moubarak has been involved in corporate transactions with an aggregate value in excess of $ 800 million and raised in excess of $150 million for mineral asset project development.

The Board of Directors and Management believe that good corporate governance is vital to New Found Gold’s long-term success and the protection of our stakeholders’ interest. Our directors commit to maintaining the highest standards of corporate governance according to evolving best practices and regulatory guidance.

New Found Gold and the Board of Directors approved corporate governance guidelines to help us effectively manage our affairs and perform our responsibilities to the highest legal and ethical standards.

A Code of Business Conduct and Ethics applies to all employees, contractors, consultants, officers and directors and promotes honest, respectful, accountable and ethical conduct.

We have a ZERO tolerance approach to the act of bribery and corruption by any employees, officers, directors, agents, consultants and contractors as set out in our Anti-bribery and Anti-corruption Policy.

A Whistleblower Policy is in place for our employees, consultants, contractors, directors of officers to communicate concerns, confidentially and anonymously, about possible improprieties, illegal or unethical activities and ensures that measures are in place for an impartial investigation.