Mexican Gold Corp. (the “Company” or “Mexican Gold“) (TSXV: MEX) is pleased to announce that Dr. Quinton Hennigh has joined the Company as a special advisor.  The Company has an agreement to acquire all the issued and outstanding shares of New Found Gold Corp. (“NFGC”) which holds a 100% interest in the Queensway Gold Project, located on the Trans-Canada Highway approximately 10 km west of Gander, Newfoundland (see the Company’s January 28, 2020 news release).  Following closing, the Company will be re-named Bonanza King Mining Corp.

Following his review of the project Dr. Hennigh agreed to join the Company as a special advisor.  Dr. Hennigh noted: “It is a great pleasure to get involved with the Queensway high-grade gold project at the discovery stage.  High-grade epizonal orogenic gold deposits are seldom seen in nature, because they are usually eroded away shortly after they form. High-grade gold mineralization recently encountered in drilling by New Found Gold at Queensway displays characteristics common to these type deposits, so it is quite exciting as a geologist to see such unique mineralization preserved in a newly identified setting.  I look forward to working with the team on what I am sure will be a very exciting next phase of exploration.”

“Queensway can be categorized as epizonal orogenic lode gold deposits, gold systems that formed at relatively shallow levels within the crust during a period of tectonic collision and mountain building. In this shallow regime, exceptionally high-grade gold mineralization can form through rapid deposition of gold triggered when large fault systems open up during seismic events allowing deep-seated gold-rich fluids to rapidly ascend toward surface. As these fluids rise, they undergo chemical changes and begin cooling causing spontaneous precipitation of metallic gold along with other minerals including quartz and certain sulfide phases. The vast majority of epizonal orogenic gold systems are uplifted and quickly eroded away shortly after formation, so it is exceptional to find such mineralization preserved in nature.

When I reviewed core from the first hole drilled at the Keats zone, I saw all the indications of this unique style of mineralization. These include abundant fine gold particles scattered through vuggy quartz veins, intense brittle quartz stockwork, fine antimony sulfide minerals, veins displaying crude banding much like one might observe in low sulfidation epithermal veins. Such features indicate mineralization formed within open space, brittle structures at relatively shallow depths within the crust.

Beyond confirming style of gold mineralization, I decided I must also see compelling evidence that the structural setting within the project area is conducive for hosting a sizeable deposit. I came away with a positive impression after looking at the Company’s data including a large volume of geophysical datasets. Large-scale structures potentially suitable for hosting sizeable gold deposits are readily evident, and there appears to be little post-mineral structural disruption, a positive sign that deposits have not been structurally dislocated and displaced. In short, the structural ingredients are there.

As with any initial review of an exploration project, I had concerns that negative historic drill results or other exploration work might discount this discovery. What I saw was quite the opposite. Yes, Noranda drilled five very shallow drill holes well above the 19.0 meters at 92.86 gpt Au encountered in New Found Gold’s hole NFGC-19-01, but all of these historic drill holes encountered significant gold mineralization that appears to be peripheral to the newly discovered high-grade system. On top of this, there is abundant evidence of additional high-grade showings elsewhere across the property: historic drill holes with high-grade intercepts, till samples displaying abundant free gold, till boulders of vein material displaying rich visible gold. In my opinion, this project is vastly underexplored.

One aspect of high-grade epizonal orogenic gold systems that is important to recognize is that the volume of rock needed to host a significant deposit is quite small. The shoot that hosts high-grade vein structures at Fosterville mine, an epizonal orogenic gold deposit in Victoria State, Australia, is over 1 km long but fits within a circle no more than 50 m diameter. One must undertake methodical close-spaced step-out drilling in such systems, and this is what I have recommended to New Found Gold. In my view, the Company has made a significant high-grade gold discovery at Keats that needs careful, systematic follow-up. I look forward to working with New Found Gold’s team as they build on this remarkable discovery and tackle the numerous other high-grade gold targets across the Queensway project.” 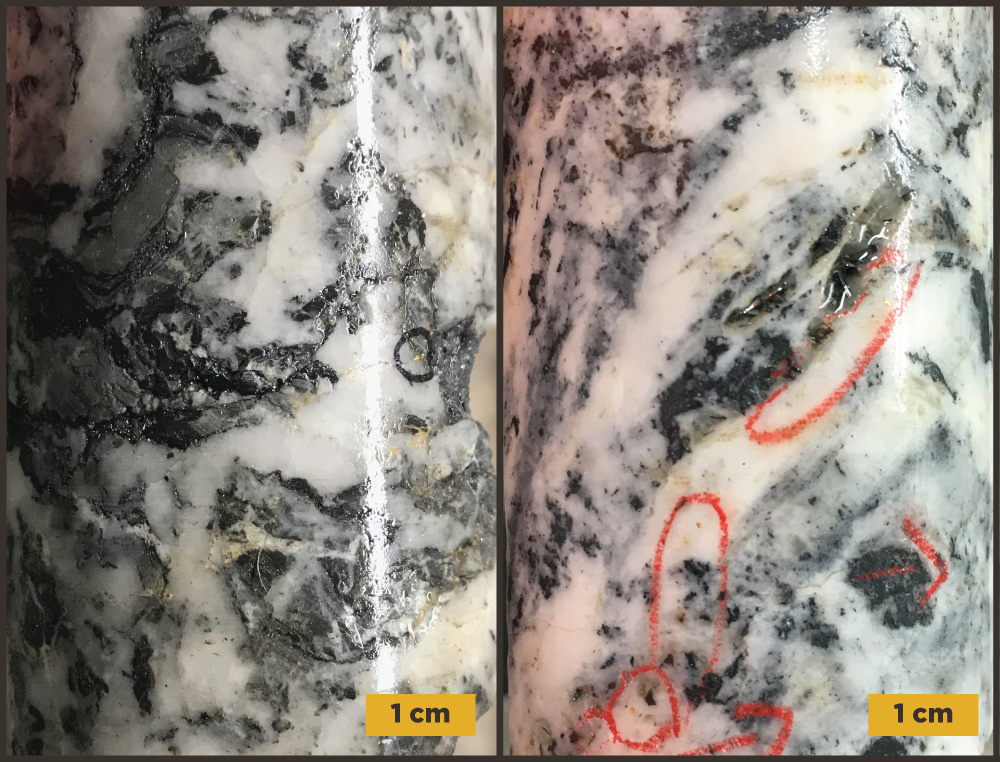 Above: Left, core from the Keats zone, Queensway gold project; right, core from the Eagle zone, Fosterville mine. Comparison of intense quartz stock work with relict black shale fragments from each deposit. Specks of visible gold are present in quartz veins and their selvages. Gray patches contain fine grained antimony sulfides, boulangerite on left and stibnite on right. 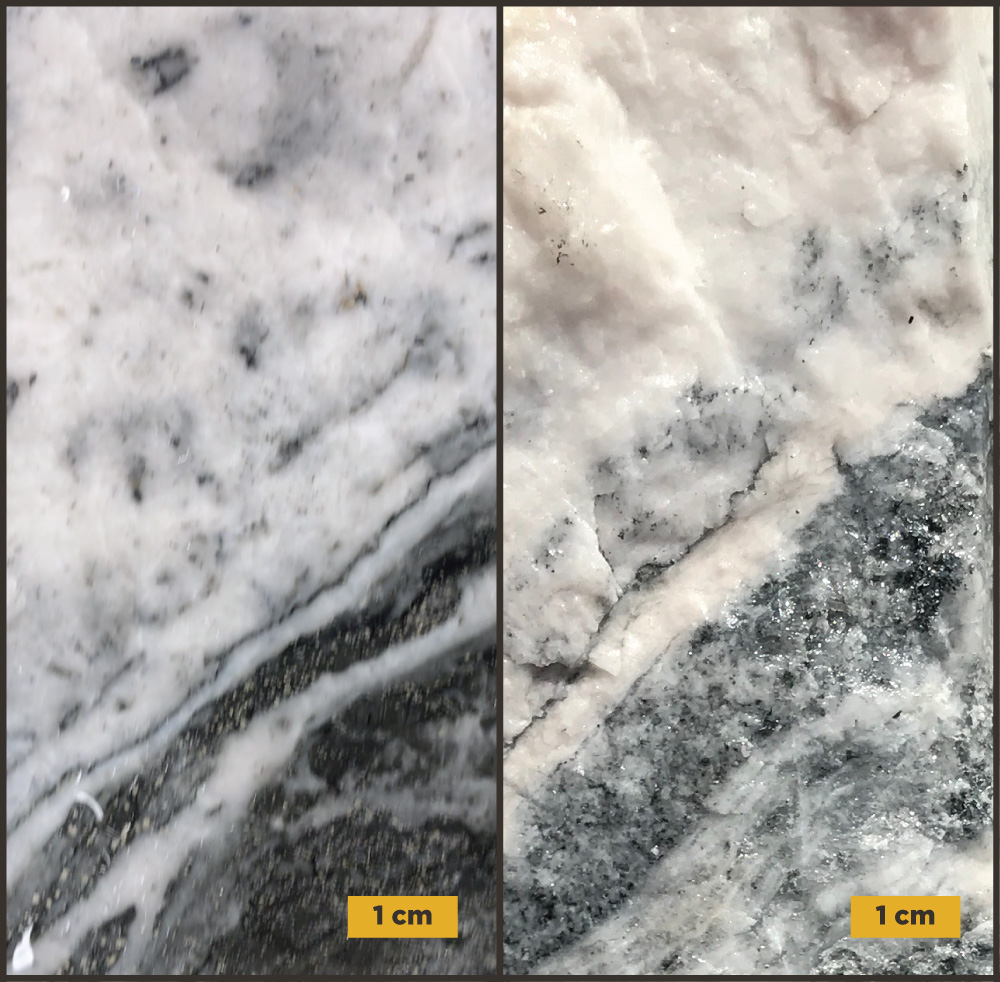 Above: Left, core from the Keats zone, Queensway gold project; right, hand specimen from the Eagle zone, Fosterville mine. Comparison of quartz veining displaying relict banding from each deposit. Dark material at the bottom is relict shaley material. Such banding is probably an original texture resulting from open space filling of quartz sulfides and gold at the time of deposition. Open space filling is indicative of a shallow level of deposition for both deposits. 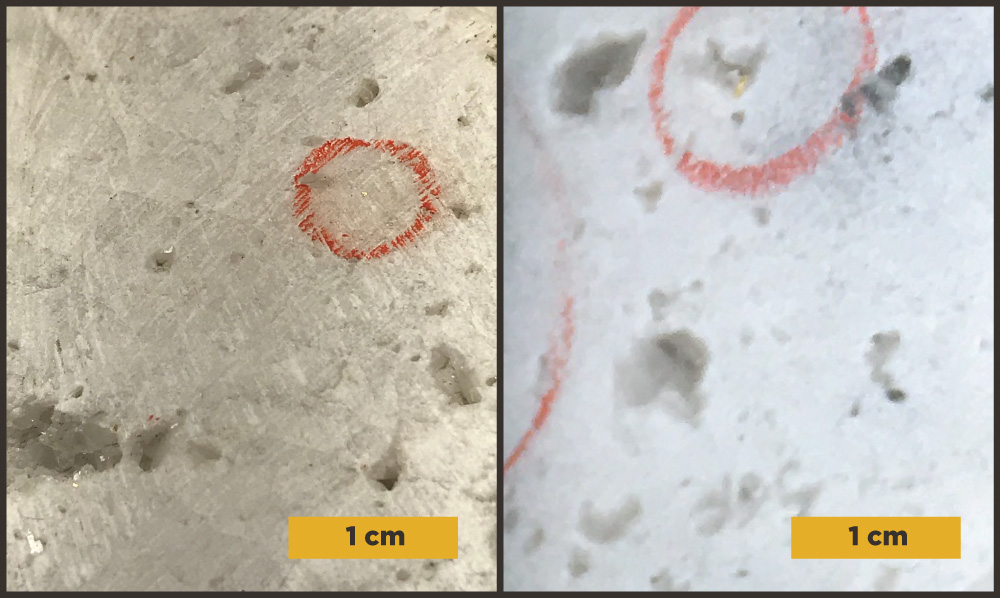 Above: Left, core from Keats zone, Queensway gold project; right, core from the Eagle zone, Fosterville mine. Comparison of vein quartz displaying numerous vugs, or small cavities, lined with quartz crystals from each deposit. Native gold is also visible in each sample. Such open space cavities are indicative of a shallow level of deposition for both deposits. 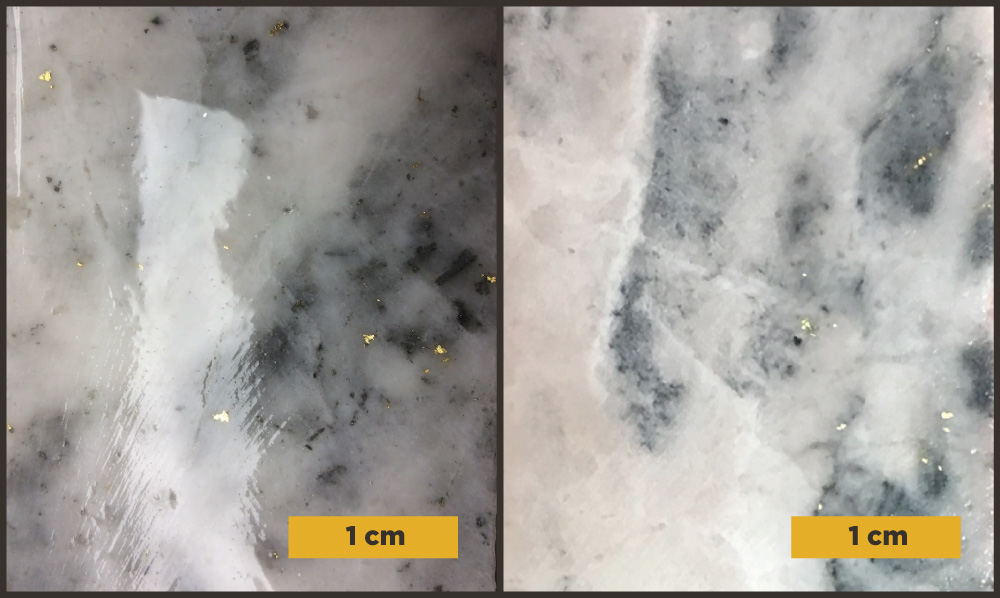 Above: Left, core from Keats zone, Queensway gold project; right, core from the Eagle zone, Fosterville mine. Comparison of gray and white quartz vein material with numerous small specks of native gold from each deposit. Grey specks are mostly antimony minerals, boulangerite on the left and stibnite on the right. Some gray flecks are particles of black shale caught up in quartz. Such fine gold particles likely formed through rapid precipitation of gold in a shallow epizonal regime within an orogenic system, an indication of a shallow level of deposition for both deposits.

Dr. Hennigh is an economic geologist with 25 years of exploration experience, mainly gold related.  Early in his career, he explored for major mining firms including Homestake Mining Company, Newcrest Mining Ltd., and Newmont Mining Corporation.  Dr. Hennigh joined the junior mining sector in 2007 and has been involved with a number of Canadian listed gold companies including Gold Canyon Resources where he led exploration at the Springpole alkaline gold project near Red Lake Ontario, a 5-million-ounce gold asset that was recently sold.  Dr. Hennigh is founder, Chairman, and President of Novo Resources Corp. (market capitalization C$620 million) focused on the exploration and development of conglomerate gold projects in the Pilbara region of Western Australia.  He is also founder, Technical Advisor and a Director of Irving Resources Inc. (market capitalization approximately C$237 million), focused on gold exploration in Japan.  Dr. Hennigh advised Eric Sprott and Kirkland Lake Gold during exploration of high-grade gold deposits at the Fosterville mine, Australia. He holds a Ph.D. in Geology/Geochemistry from the Colorado School of Mines.

The scientific and technical content of this press release has been reviewed, prepared and approved by Mr. Greg Matheson, P.Geo. Chief Operating Officer for New Found Gold Corp., who is a “Qualified Person” as defined by National Instrument 43-101 – Standards of Disclosure for Mineral Projects (“NI 43-101”).

True widths of the new exploration intercepts reported in this press release have yet to be determined but are estimated to be 60 – 80% of reported core lengths. Additional drilling is planned for the immediate area which will enable the true width determination. Assays are uncut, and calculated intervals are reported over a minimum length of 2 metres using a lower cutoff of 3.0 g/t Au. All HQ core assays reported were obtained by either whole sample rock metallic screen/fire assay or standard 30-gram fire-assaying with ICP finish at ALS Minerals in Vancouver, British Columbia. The whole sample metallic screen assay method is selected by the geologist when samples contain coarse gold or any samples displaying gold initial fire assay values greater than 1.0 g/t Au. Drill program design, Quality Assurance/Quality Control and interpretation of results is performed by qualified persons employing a Quality Assurance/Quality Control program consistent with NI 43-101 and industry best practices. Standards and blanks are included with every 20 samples for Quality Assurance/Quality Control purposes by the Corporation as well as the lab. Approximately 5% of sample pulps are sent to secondary laboratories for check assays.

NFGC is a private exploration company focused on the district scale Queensway Gold Project in Central Newfoundland. As the largest mineral rights holder on the island of Newfoundland the company is uniquely positioned to capitalize on the underexplored nature of this emerging gold district. Further information can be found on the company’s website www.newfoundgold.ca. New Found Gold has a strong shareholder base with Palisades Goldcorp (56%), Eric Sprott (17%), Rob McEwen (8%), and management and directors (10%).

Mexican Gold Corp. is a Canadian based mineral exploration and development company committed to building long-term value through ongoing discoveries and strategic acquisitions of prospective precious metals and copper projects in the Americas. Mexican Gold is exploring the Las Minas Project, which is located in the core of the Las Minas mining district in Veracruz State, Mexico, and is host to one of the newest, under-explored skarn systems known in Mexico.

All statements in this press release, other than statements of historical fact, are “forward-looking information” with respect to Mexican Gold and New Found Gold within the meaning of applicable securities laws. Mexican Gold and New Found Gold provide forward-looking statements for the purpose of conveying information about current expectations and plans relating to the future and readers are cautioned that such statements may not be appropriate for other purposes. By its nature, this information is subject to inherent risks and uncertainties that may be general or specific and which give rise to the possibility that expectations, forecasts, predictions, projections or conclusions will not prove to be accurate, that assumptions may not be correct and that objectives, strategic goals and priorities will not be achieved. These risks and uncertainties include but are not limited to exploration findings, results and recommendations, as well as those risks and uncertainties identified and reported in Mexican Gold’s public filings under Mexican Gold’s SEDAR profile at www.sedar.com.  Although Mexican Gold and New Found Gold have attempted to identify important factors that could cause actual actions, events or results to differ materially from those described in forward-looking information, there may be other factors that cause actions, events or results not to be as anticipated, estimated or intended. There can be no assurance that such information will prove to be accurate as actual results and future events could differ materially from those anticipated in such statements. Mexican Gold and New Found Gold disclaim any intention or obligation to update or revise any forward-looking information, whether as a result of new information, future events or otherwise unless required by law.